The Philippine Ports Authority or PPA is a government agency with corporate foundation created under Presidential Decree (PD) No. 505 issued on 11 July 1975. However, in December of 1975, PD No. 857 amended PD 505 and expanded the scope and function of the organization, which include the implementation of an integrated program for the planning, development, financing, operation and maintenance of ports or port management offices for the entire country under its port system.

Executive Order (EO) No. 513 issued in 1978 further broaden the functions, granting the PPA police authority, creating the National Port Advisory Council and empowering the agency to exact reasonable administrative fineds for specific violations of its rules and regulations. EO No. 159, released in 1987, vested the PPA with the function of undertaking all port construction projects under its jurisdictional area and granted financial autonomy to the Authority.

PPA is an attached agency of the Department of Transportation (DOTr) for policy and program coordination. 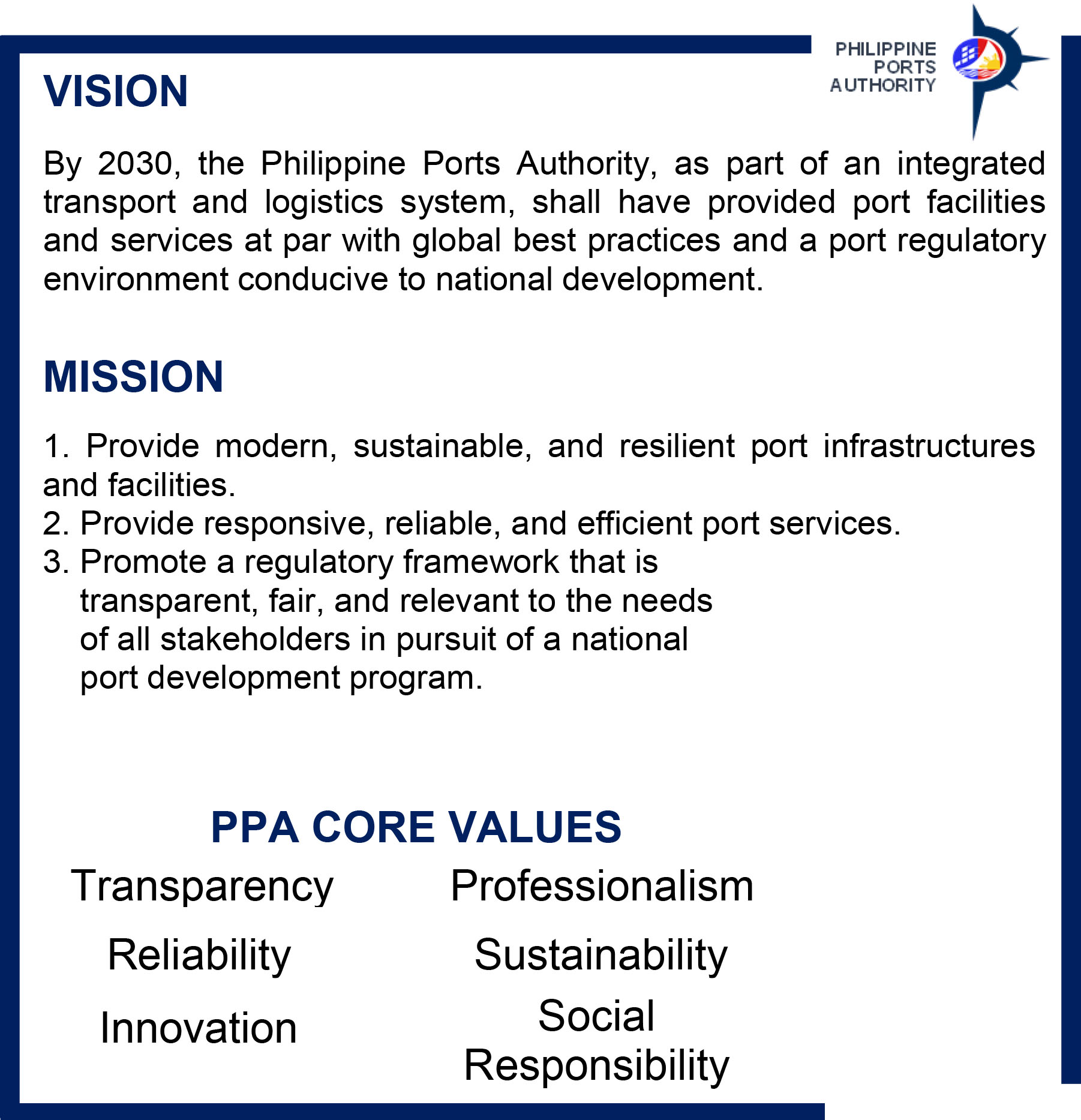 • To coordinate, streamline, improve and optimize the planning, development, financing, construction, maintenance and operations of ports, port facilities, port physical plants, and all equipment used in connection with the operations of ports
• To ensure the smooth flow of waterborne commerce passing through the country’s ports whether public or private, in the conduct of international and domestic trade
• To promote regional developments through the dispersal of industries and commercial activities throughout the different regions.
• To foster interisland seaborne commerce and foreign trade
• To redirect and recognize port administration beyond its specific and traditional functions of harbor development and cargo-handling operations to the broader function of total port development
• To ensure that all income and revenues are properly collected and accounted for by the PPA, that all such income and revenues will be adequate to defray the cost of providing facilities and services of the Port Management Offices (PMO) and to ensure that a reasonable return on the assets employed shall be realized

• To formulate, in coordination with the National Economic and Development Authority (NEDA), a comprehensive and practicable Port Development for the State and to program its implementation, renew and update the program annually in coordination with other national agencies
• To supervise, control, regulate, construct, maintain, operate, and provide such facilities or services necessary in the ports vested in or belonging to the PPA
• To prescribe rules and regulation, procedures, and guidelines governing the establishment, construction, maintenance, and operations of all other ports, including private ports in the country
• To license, control, regulate, and supervise any construction or structure within any Port Management Office
• To provide services within the PMOs and the approaches thereof, including but not limited to—berthing, towing, mooring, moving, slipping or docking—any vessel, loading or discharging any vessel and sorting, weighing, measuring, warehousing or otherwise, handling goods
• To exercise control of or administer any foreshore rights or leases, which may be vested in PPA
• To coordinate with the Bureau of Lands or any other government agency or corporation, in the development of foreshore area
• To control, regulate and supervise pilotage and the conduct of pilots in any PMO
• To provide or assist in the provision of training programs and training facilities for its staff of port operations and users for the efficient discharge of its functions, duties and responsibilities
• To perform such acts or provide such services as may be deemed proper or necessary to carry out and implement provisions of the PPA charter

The General Manager manages and supervises the PPA with the support of an Assistant General Manager for each of the areas: Operations, Finance and Administration, and Engineering.

To simplify port administration and control, the country has been divided into geographical groupings called Port Management Office. The PMOs consist of frontline operating units called terminals, which may be composed of a base/hub port and other government and/or private port. The administrative units overseeing the operations of the terminals are called Terminal Management Offices or TMO. Overall, the field offices of the PPA are composed of 25 PMOs wherein 10 are major gateways while 15 are considered hub ports.

Office of the General Manager (OGM)

The OGM is the highest executive office in the organization. It is mandated to undertake overall supervision and control of PPA activities, and define and promulgate the corporate objectives, targets and direction of the Authority.

Aside from the 25 PMOs, the following Departments are also under the direct supervision of the OGM.

Office of the Assistant General Manager for Operation (OAGM-O)

The Office is mainly responsible for prescribing, updating and recommending policies, strategies, system and procedures, plans and programs in the operation of ports and delivery of port services, and the enforcement of port rules and regulations. To accomplish these tasks, the OAGM-O is assisted by four Departments, namely:

The OAGM-FA holds the responsibility of formulating, updating and prescribing policies, strategies, programs, and rules and regulations in the areas of financial transactions, cash and resource management, and other administrative requirements of the Authority. Five Departments lend support to achieve the roles and functions of the office, namely:

Office of the Assistant General Manager for Engineering (OAGM-E)

Principally tasked with the formulation, updating and implementation of a comprehensive port development plan for the PPA Port System, the OAGM-E is composed of three Departments, namely:

The PPA Port System, as approved by the Board of Directors Executive Committee on 26 September 1996, comprises 115 ports. Outside of the PPA Port System, are mostly secondary or tertiary ports under the jurisdiction of the DOTr while other ports, including some major ports, were devolved to specific government agencies or local government units such as the Cebu Port Authority and the Subic Bay Metropolitan Authority.